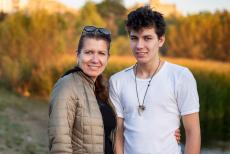 In 2015, our son Chad was in fourth grade and got into a conflict with one of his teachers. He had a time-out and was then sent to the office. He was very upset and felt he was not treated fairly. Chad ran away from school to come home. This resulted in a suspension from school and privileges being taken away at home. We then saw a downward spiral in his behavior. He was uncharacteristically angry, agitated and was aggressive toward the school principal and his mother. The school encouraged us to connect our son with a therapist.

We took Chad to Brook Lane’s Partial Hospitalization Program in Frederick. He was resistant to the services and would not participate there. The situation grew worse and it was suggested to have him go into the hospital. He was admitted for almost two weeks. As parents, we felt overwhelmed. We had not dealt with anything like this before and were trying to cope as best we could. Chad was discharged and continued in outpatient therapy for a short time. He eventually resumed his schooling and things went well for several years.

Suddenly in eighth grade, Chad was more emotional, agitated and the school reported he was not engaged. He didn’t want to go to class and later refused to return to school. We were referred back to outpatient services at Brook Lane in Frederick. We developed a plan to continue therapy and to home school our son for the remainder of eighth grade. He would return to public school for ninth grade, but it only lasted a month before he reverted back to refusing to go to school.

This was very challenging for us as a family. Because Chad was enrolled in the public school system and not attending, we were threatened by truancy charges, which have serious consequences. It felt like we were in gridlock for several months trying to sort everything out. Eventually a formal 504 plan was developed. Chad was advocating for returning to home schooling and was feeling trapped in the situation. It was decided and settled on to dis-enroll him from public schools and create a specific plan for home schooling and virtual classes.

This seems to be what was needed for Chad. He excelled with his education and completed his GED. He managed to finish his Eagle Scout Project and got his driver’s license. He is now enrolled in a tech program to obtain a certificate as a machinist. We’re thankful for the support provided through Brook Lane’s outpatient therapy for Chad and us. It helped us figure out the mental health system, learn to contract with our son and create incentives for him.

For other families struggling with similar issues, it’s important to remember you don’t have to have all the answers. It can be frustrating dealing with different specialists, yet it is also helpful to have multiple people collaborating so you can develop a plan, problem solve together and create helpful parenting strategies. It has helped our son get to a much better place.

When I was about to turn 16, I would hear things in my mind like, “Touch this [thing] so many times so something bad won’t...

What is Transcranial Magnetic Stimulation?

What is TMS? Transcranial Magnetic Stimulation (TMS) is a noninvasive, anesthesia-free treatment used to treat depression by...

Summertime is the Perfect Time for Self-Care

In a world that keeps ever changing, one thing is certain: self-care is a vital aspect of our day-to-day lifestyle. Self-...

Beating the Back to School Blues

August is here and that means that back to school time is quickly approaching. The lazy days of summer are winding down and...

Recovery is a Journey

Living in recovery is a journey that is not always straight and steady–it has ups, downs and curves. There may be setbacks,...

A Professional License to Practice: A Prized Possession

This seminar will examine the Code of Ethics and state laws and regulations to empower clinicians to better understand how...