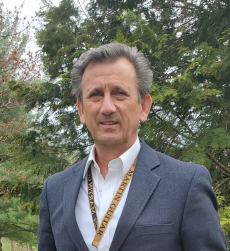 Michael Reyka, PhD, joined the Brook Lane staff as Chief Operating Officer on March 8, 2021. Originally from Lakewood, Ohio, Michael has had an interest in healthcare as long as he can remember. He began his educational and professional journey into the realm of healthcare by receiving a nursing diploma from the Fairview General Hospital School of Nursing in Cleveland in 1987. He gained experience as a registered nurse in an emergency care setting and then pre-hospital care. He had the opportunity to move into charge and supervisory roles and then into management. In 1992, he earned a Bachelor of Science degree in general education from Mount St. Mary’s College in Emmitsburg, Maryland, followed by a Master of Business Administration degree in management and human resources in 1996, from Mount St. Mary’s University. In 2015, Michael completed his doctorate degree in leadership and administrative studies from the Indiana University of Pennsylvania.

Michael has two grown children – a daughter, 35, who lives in Mechanicsburg, Pennsylvania and a son, 32, who lives in Charleston, South Carolina. He and his wife Jill, a former ER nurse and current Regional Director for Patient Safety at WellSpan, live in Smithsburg, Maryland. In addition to an interest in healthcare, Michael also has had a life-long love of music. For 30 years, he has been part of an acoustic guitar duo called the “Druids” with his friend Larry. He also has played the drums since high school and continues to play on occasion with two different bands.

Michael has spent a considerable amount of time and effort researching and discovering his late father’s military experiences from World War II – details his father never shared with the family. Michael has published one book and written another pending publication detailing his father’s military history, including retracing his steps across eastern France in 1944 and discovering the reasons for his life-long silence on his past.

Michael was drawn to the Chief Operating Officer position at Brook Lane because it was well aligned with his academic background and past work experiences. He also wanted to remain grounded in his community. “I am excited about the mental health field and where it will go in the future,” says Michael. “With the COVID-19 pandemic and current state of social unrest in our country, there will be an increasing need for mental and behavioral health care services. Brook Lane is positioned to meet those needs through growth and innovation and I am happy to be a part of that.”

Many of us wear more than one hat, but very few of us wear four or more on any given day. Vinnie Caesar does just that.

Mental Health Benefits of Yoga: The Healing Power of the Breath

Before reading this article, take notice to the way you are feeling right in this moment. Are you feeling anxious? Angry?...

Crystal has been a part of Brook Lane's dietary team for over five years. She has performed numerous roles in the department...

The Importance of Student Mental Health

This program will provide 3 hours of continuing education in ethics, law, professional conduct and risk management to...

This seminar will focus on the spectrum of illnesses known as schizophrenia and related disorders, with special emphasis on...